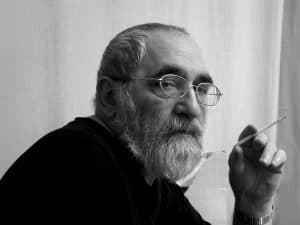 He was born on 27 of April, 1948 in Yerevan, Armenian SSR.
In 1974 graduated from Yerevan Artistic-Theatrical Institute.
Since 1976 has been a member of Artists’ Union, USSR.
Starting from 1974 has been actively participating in all republican, all-union and numerous foreign exhibitions.
After graduating the institute he was invited to stay in the same institute as a graphical drawing instructor, where he worked till 1979.
In 1980 he held a personal exhibition in USA – Los Angeles, San-Francisco.
In 1980 “triumphal train” of personal exhibitions of Aleksandr Bagramyan started abroad:
1981 – GDR, Poland
1982 – GDR, Czechoslovakia
1983 -FRG, USA
1991 – Switzerland
1994 – Syria, Lebanon

Starting from 1984-86 Alexander Bagramyan created his portrait gallery of contemporaries, mainly, exhibiting in Moscow.
Since 1989 lived and worked in Poland (Warszawa), FRG (Diisseldorf), Switzerland (Bern).
1994-200 in Lebanon (Beirut).
In 2000 founded his publishing house “ASB-Akropol” in Moscow.
He is a member of Artisits’ Union of Russian.
At present, lives in Los Angeles