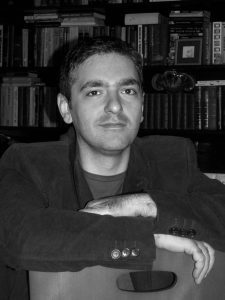 He was born in 1975, in Yerevan, Armenia. In 1994 graduated from Yerevan Artistic School, after F. Terlemezyan, department of graphics’ design, with a diploma of artist-graphics.
Sergey Bagramyan’s works were exhibited in major art saloons of Russia, Western Europe and USA.
Painter’s personal exhibitions were held in Switzerland, Poland, Germany, Italy, USA, and Lebanon.
Since 2005 works of Bagramyan have been shown off in Moscow “Art-Manege”, exhibitions organized by “Artefact” gallery, after Karina Shanshieva.
Since 1995 the artist started working on illustrations of trilogy of J.R.R. Tolkien “The Lord of Rings”. 40 illustrations of large and small formats had been created. The works on this theme are continued till present.

In 2000 “ASB” publishing house was founded, so as to promote children’s literature, works of foreign and Russian writers.
Since the end of 2004 he is a leading painter in “Krasnov Design” company (Studio of Boris Krasnov).
Sergey Bagramyan organized numerous projects held in “Forum Hall” celebrations’ hall and “Krasnov Design” company, which included graphical works for the company “Nestle” as well as large-scale design of halls.
Since 2006 is a member of Creative Union of Artists’ of Russia and International Federation of Artists, graphics’ section.
Awarded with prizes and medals of Russia Academy of Arts, as well as with golden medal of Academy for his personal contribution in the world’s art.